Anania of Narek: Exhortation on Humility

Anania of Narek (c. 920-980) was the founding abbot of Narekavank‘, a monastery located in the Armenian kingdom of Vaspurakan. The monastery’s most famous and distinguished monk was Anania’s cousin and pupil, St. Gregory of Narek. Anania wrote a series of pareneses or exhortations on virtue. In contrast to the more complex poetry of his student’s Book of Lamentation, the exhortations are written in a plain and easy to understand Armenian. Narekavank‘’s mission was to educate monks who would bring the Church closer to a laity that had become increasingly disengaged and indifferent. The exhortations were models of clear moral instruction that the monks and vardapet’s could use to preach in the churches and instruct the people in Christian morality.

This exhortation on humility is addressed to an unknown monk who had requested that the abbot expand on the various dispositions and actions that constitute a person of perfect humility. Anania provides a list of examples of humility each supported with a biblical verse or passage. In some cases, his citations deviate from the standard Armenian Bible translation. In at least one case he modifies his citation with a metaphor found in the writings of a Church Father, St. Isaac of Nineveh (seventh century).

The English translation is based on the Armenian edition of Hrachya Tamrazyan in the Matenagirk‘ Hayots‘ [Armenian Classical Authors], vol. 10, p. 342-46. The numbers in square brackets correspond to that edition’s sentence numbering.

[1] Now you asked how many parts there are that when taken together make someone perfect in humility, and you requested that I, Anania, write about this in a book. [2] As the apostle said: in humility let each esteem others better than themselves1. [3] In saying this, he makes clear that there are many parts of humility. [4] There are some who only have a few of these parts, some who have many, and others who have all of them. [5] Now first and foremost it is humility when a man esteems himself less worthy than everyone else, like the tax collector who did not want to lift his eyes up to heaven and whom the Lord praised.2[6] Humility is also submission, by which one considers oneself in the ranks of servants and serves one’s companion, as the apostle says: submit to one another in the fear of God3[7] Humility is sadness and tears, by which one does not count oneself among the hired hands, even when one does virtue, but hopes through prayer to receive the kingdom. [8] This is why the Lord said: when you have accomplished all these virtues, say that we are unprofitable servants, we have done what was our duty to do.4

[9] Humility is when one has patience toward one’s brother in a time of anger and considers oneself at fault, for to become enraged and oppose him is pride. [10] As Solomon said: The proud man does not bear indignities.5 [11] Humility is silence, in which one does not consider oneself worthy to stand and speak before a multitude. [12] For as the Lord said, He who speaks from himself seeks his own glory.6

[13] Humility is when they honor your friend and neglect you, and you are not displeased, but instead say “I am not worthy of that which I have.” [14] As Solomon said: Do not toil to be with the rich but restrain yourself and you will find favor with God.7[15] Humility is when one does not hold one’s friend in servitude but serves him oneself, as the Lord says: The Son of Man came not to be served, but to serve.8

[16] Humility is when you see someone’s faults and you do not speak ill of them or judge them, but instead say ‘If I am a sinner, how can I judge another?’ [17] This is why the Lord said—Do not judge lest you be judged.9

[18] Humility is also loving one’s brother. For these are the commandments of love: to humble oneself before one’s companions, to share their pains when they are sick, to comfort them when they mourn, to give yourself in service to them.  [19] The proud person does not do this and does not regard his brother to be worthy of his humility but regards himself superior to all. [20] This is why it is written: Like salt, humility seasons every virtue, and where there is neither love nor humility, virtue loses its flavor and is discarded.10

[21] Humility is when you do something virtuous but do not constantly reflect on it and become puffed up with pride like the Pharisee, but whenever you do something sinful, you do reflect on it and humble your thoughts. [22] This is like the apostle, who regarded himself as sinful and said: I was formerly a blasphemer and insolent but I received mercyand [23] also forgetting the virtue that is behind and reaching forward to what is before.11

[24] Humility is when men praise you and give you gifts, and you do not consider it a reflection of your own worth, but you glorify and praise God and say “This comes from your mercy and not according to my own merit.” [25] As Solomon said: As much grandeur as you achieve, if you remain humble you will find mercy and grace before God.12

[26] Humility is when you encounter trouble and sorrow comes upon you, yet you do not grieve but praise God by saying that I am worthy not only of this much, but much more punishment for my sins, and blessed is God for making me worthy of trouble in this transient life and mortal flesh. [27] As the apostle said: Therefore I take pleasure in my sorrow, my troubles, and my tortures, for when I am weak, then am I strong.13

[28] Humility is the wearing of plain clothing, not what the honorable and glorified people wear. For men chase after glory with their clothes. [29] This is why it is written: Do not become soft through your dress nor adorn yourself with delicate finery; for empty is their beauty.

[30] Humility is when the day passes by peacefully, and when you arrive at the evening, you praise God and say:

Many people—even among the saints—
Are anxious and in need.
But I, who am unworthy,
To me you gave bread and nourishment,
And made my day pass in peace.
[31] This now is due to your mercy,
And not according to my merit.

[33] Humility is when you want to do something virtuous, yet you do not consider yourself adequate to set out and accomplish it, but you ask God to give you virtue and aid, saying:

Help me Lord in my weakness
So that I may be one pleasing to You.

[34] As the Lord says: Whoever abides in Me, and I in him bears much fruit, for without Me you can do nothing.15

[35] Humility is when your heart is angered and you hold back your rage and do not consider yourself worthy to turn against your brother. [36] As Solomon says: The humble stand only in prayer, but the proud and foolish give an answer.16

[37] Humility is when you not only love those people who are famous, but you humble yourself before the poor and comfort the foreigner. [38] This is what the Lord did. [39] Pilate spoke and he did not answer, but he spoke to the thief with much compassion and gave him a gift.17And when the blind petitioned him, he stopped, drew near to them, and opened their eyes.18

[40] Humility is when you do not always act according to your will, but you take advice from your superiors and teachers, like Moses, who never failed to listen to the advice of Jethro but accepted and accomplished all that he told him.

[41] Humility is when one is troubled and prepared for all kinds of treachery, and one does not become arrogant and say “Who will conquer me?” [42] This is why Solomon said: Treachery crushes the heart of the wise man, but the proud and arrogant fall into its trap.19

[43] Humility is when you accomplish something virtuous and you do not think that you did this by yourself and your own power, but from God’s help. [44] As the apostle said: Not I, but God’s grace in me.20

[45] Humility is when you do not advance forward and take the highest place of honor but accept those who are called your superiors. [46] As the apostle said: For it is not the one who commends himself who is approved, but the one whom the Lord commends.21

[47] Now humility is the foundation of every virtue, and all of the saints were pleasing to God on account of their humility. [48] Abraham was humble and said: I am dust and ashes.22[49] That is why he became the chief of the patriarchs. [50] David spoke likewise: I am a worm and not a man, a reproach of man.23[23][51] That is why he received the grace of prophecy from God and was called to be king of his people. [52] Likewise did Isaiah speak: Woe to me, for I have unclean lips.24 [53] That is why he was called the theologian of the prophets. [54] So too the Forerunner spoke: I am not worthy to untie his sandal strap.25[55] That is why he was worthy to baptize Christ. [56] Peter too spoke this way: Depart from me, O Lord, for I am a sinner!26[57] That is why he received the keys and became the foundation of the church.27 [58] So too did Paul speak: I am not worthy to be called an apostle.28 [59]For this reason he was caught up to heaven and saw paradise.29

[60] Now it is because humility is the chief of the virtues that the prophet said: A sacrifice to God, God does not despise a humble and pure heart.30[61] And Isaiah said: Inwhom shall I dwell if not in the peaceful and humble and those who tremble at my words.31[62] And the Lord himself said: Those who humble themselves will be exalted.32[63] And Paul said: May all with humility esteem others better than themselves.33

[64] The testimony from the doctors concerning humility is immense. [65] For no one is more beloved by God than the one who humbles himself and esteems himself to be least for the sake of Christ, to whom is fitting glory, power, and honor now and always unto the ages of ages. Amen. 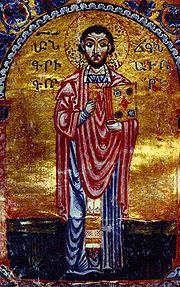