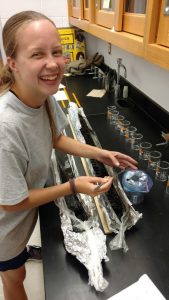 Elena is an Environmental Science major from Nashville, Tennessee who is working on a fire record from a fen in Colorado.  She is a Synovous Scholar. 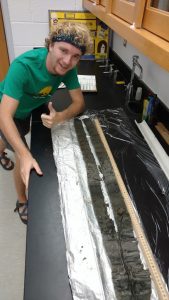 Jared is an Environmental Science major from Maryville, Tennessee.  He is creating a multiple proxy record of fire and climate from Big Alkali Lake, Colorado.  His work is supported by a Richards Undergraduate Research Grant.

Student Collaborators Off on New Adventures 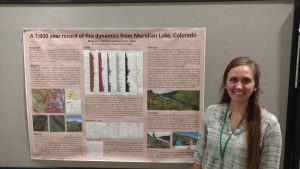 Meghan is an Environmental Science major from Rockmart, Georgia.  She has compiled a 7,700 year fire and climate record from Meridian Lake, Colorado.  Meghan was a Synovus Scholar during her sophomore year.  She followed that up with a 20,000 year record of fire and precipitation from West Virginia which was the basis of her Honor’s thesis. 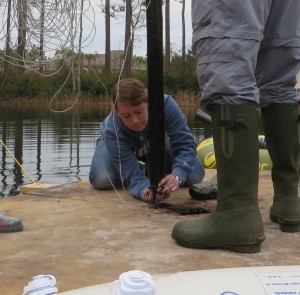 Chelsea graduated from Berry in 2018.  She created a fire record from Clear Pond, South Carolina and was supported by a Richards Undergraduate Research Grant.  She presented her work at the 2017 and 2018 AAG meetings and won the award for best poster from the Paleoenvironmental Change Specialty Group in 2018.  She is currently working as a herpetology researcher. 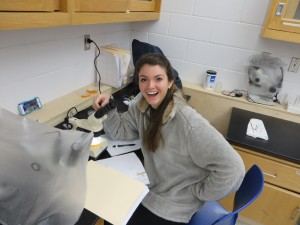 Karli is from Birmingham, Alabama and graduated from Berry with a BS in Environmental Science in 2017.  During her two years in the lab, Karli used macroscopic charcoal analysis to reconstruct fire dynamics in Western Colorado. She presented this work at the 2017 American Association of Geographers meeting in Boston.  Karli is currently working as the Program Manager for the Coosa Riverkeeper in Birmingham. 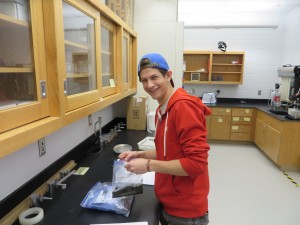 Rhett is Dallas, Texas and graduated from Berry with a BS in Environmental Science in 2017.  Rhett performed geochemical analysis on sediments from western Colorado and presented his findings at the 2017 American Association of Geographers meeting in Boston.  Rhett is currently working as an field scientist in Savannah, Georgia. 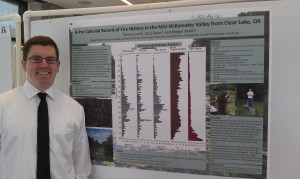 Tommy graduated from Willamette University with a BA in Environmental Science in 2013. His undergraduate thesis examined the fire history of Clear Pond, Oregon. 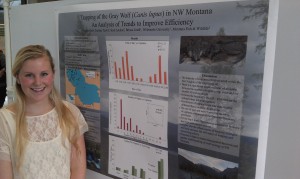 Meagan graduated from Willamette University with a BA in Environmental Science in 2013.  Her undergraduate thesis examined the best practices of wolf trapping.