This time, our greenhouse reporter Sarah Grace brings us

an interview with a very distinctive member of our greenhouse, 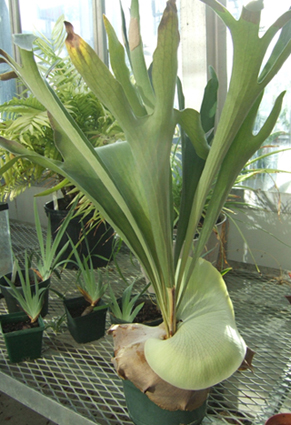 SG: It’s very good to be interviewing you today, Mr. Staghorn. Tell us a little about yourself.

Staghorn: Thanks! I am a fern, and a member of the genus Platycerium. That means “broad-horn” in Greek… you can plainly see how that describes me. Some others call me Elk’s Horn Fern or Antelope Ear, still obviously in reference to my rather cervine fronds!

SG: So, Staghorn, where do you call home?

Staghorn: I am native to many tropical areas, such as Southeast Asia, Madagascar, and parts of Austraila. But don’t take me for a pushover– I can handle temperatures down to 15 degrees Fahrenheit!

SG: Very impressive! So how do you make a living?

Staghorn: I like to make my home on the branches of trees– scientifically, they call me an “epiphyte”, Greek for “growing on something else”. But don’t assume I’m a parasite! I take root and absorb nutrients from humus, or light soil from decaying leaf matter from the trees above. I catch rainfall in my older, shrivelled fronds called mantle leaves, which are cup shaped. These also support the rest of my body. Pretty efficient design, huh?

SG: I agree. We know ferns reproduce differently from the typical plant, but would you care to elaborate on this touchy subject?

Staghorn: Haha, sure! Ferns have been around much longer than what you call a “typical” plant– we regined for two hundred million years before flowering plants! We ferns don’t have flowers or seeds. We reproduce though spores. On my fertile fronds, there are velvety, brown spore producing bodies called sori– sorus in the singular. These sori are clusters of sporangia, which hold the haploid spores. When the spores are released, with luck one will land on a patch of fertile ground. Mitosis happens, forming a teeny plant called a gametophyte. You probably won’t notice these they are so tiny. From the gametophyte, eggs and sperm are produces, which as you know will create an embryo. It seems complicated, but obviously it’s worked for longer than you can imagine!

SG: Is there anything else you would like to tell us?

Staghorn: Ferns, including me, are surrounded by folklore. According to Slavic folklore, ferns bloom once anually on Ivan Kupla night. Any person lucky enough to find this rare fern flower will be blessed with wealth and happiness! In Celtic folklore, it is said that fern “seeds” become visible on St. John’s eve. The gatherer of the seed will gain the power of invisibility. Pretty incredible, but sadly not true (don’t tell anyone)! I’ll also mention that I have a cult following among some horticulturalists… probably for my striking looks and ease of care! I may not look it, but I am not a high-maintenence plant.