My students and I first began studying coyotes (Canis latrans) in 2002.  Coyote populations have increased in the eastern U.S. over the past 30-40 years.  An animal that was once restricted to areas west of the Mississippi River is now found in all states except Hawaii.  Humans literally cleared the way for the eastward expansion of coyotes.  The conversion of forests to agricultural/developed lands and the extirpation of wolves have opened up ecological niches that are now being filled by coyotes.  As a result, coyote activity is on the rise in many metropolitan areas, which has caused curiosity, confusion and concern among many residents.

1)     The Atlanta Coyote Project.  We are learning more about the behaviors, population size, home range, activity patterns, and distribution of metro Atlanta coyote populations while helping to develop effective management and public education strategies. We maintain an informative and extensive website, and you can also check out the project’s Atlanta Coyote Project Facebook page.

2) Urban Biodiversity. Atlanta, Georgia has been one of the fastest growing metropolitan areas in the U.S. over the past several decades and the human population is now close to 6 million.  Urbanization has been rapid and widespread, thereby creating a highly fragmented mosaic of urban green space.  As metropolitan Atlanta grew, so too did the region’s Coyote population, which has caused a mix of curiosity, delight, and concern among the city’s residents.  Although the value of urban wildlife is now recognized by many people, the Coyote’s role in the animal community is often misunderstood or unknown, particularly in areas like the southeastern U.S. where it is a relative newcomer.  In an attempt to learn more about urban wildlife, particularly Coyotes, we monitored a suburban green space in Atlanta, Georgia using remote cameras from 2016 to 2018.  A Coyote pair occupied the site throughout the duration of the study and they produced offspring during each year.  Biodiversity was high, as we detected 14 different mammal, 2 reptile, and 22 bird species.  Our study provides further insight into an urban Coyote population and its inclusion as part of an urban wildlife community. Mowry, C.B. and L.A. Wilson (2019) Species richness within an urban coyote territory in Atlanta, GA, USA. Urban Naturalist 27: 1-14.

3)     Melanistic Coyotes. Melanism is rare in Canis latrans (Coyote), but we detected the phenotypic trait several times in northwest Georgia. We observed up to 9 melanistic coyotes during a 9-year period from 2003-2012; 5 were obtained from trail-camera photographs, 2 were captured during a radio-telemetry study, and 2 were hunter-killed. The ancestry of southeastern Coyotes is unclear, and we suggest that a genetic study that includes melanistic individuals could lead to a further understanding of the potential influence of C. lupus (Gray Wolves), C. rufus (Red Wolves) and/or C. lupus familiaris (Domestic Dogs) on the Coyote’s genetic makeup and evolutionary history.  Mowry, C.B. and J.L. Edge (2014) Melanistic coyotes in northwest Georgia. Southeastern Naturalist 13(2): 280-287.

4)     A Dietary Study of Coyotes in Yellowstone National Park.  This project is being conducted in collaboration with the Yellowstone Ecological Research Center (YERC).  YERC has been studying coyotes in Yellowstone since the late 1980s, both pre- and post-gray wolf (Canis lupus) reintroductions in the park.  Coupled with YERC’s data sets on prey populations, climate change, and coyote behavior and demography, dietary information will further our understanding of the coyote’s role in the Yellowstone ecosystem.

5)     Morphology, Longevity and Ranging Patterns of Coyotes in Northwest Georgia. This project incorporated the use of radio-telemetry, camera trapping, and GIS technology to track coyotes on Berry College’s 26,000 acre campus for over 3 years.  Measured home range sizes averaged 36 km2. 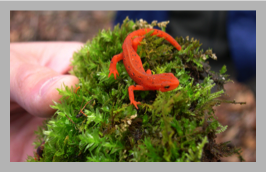