“At the Second Biotest Conference (September 1991, Helsinki), Vladimir Zakharov drew an analogy between an ecotoxicologist’s use of developmental instability and a physician’s use of deviations from normal body temperature.  Regardless of the availability of more sophisticated and specific methods, a physician will usually measure body temperature first.  It is a diagnostic measure of physiological homeostasis, and is a most informative measure of individual health.  Likewise, we view developmental stability, in all its myriad forms, as a valuable diagnostic tool of first resort.”   (Graham et al. 1993c)

Developmental stability refers to an individual’s ability to produce a consistent phenotype in a particular environment.   One actually measures developmental instability, the converse of developmental stability, by examining slight, random deviations from perfect symmetry.  Such random asymmetry is called fluctuating asymmetry.  Because it may be caused by either genetic or environmental stress, fluctuating asymmetry has obvious applications in ecotoxicology (Graham et al. 1993a, b).  Nearly 30 years ago, David Valentine, Michael Soule, and Paul Samollow (1972) showed that fin rays of coastal marine fishes were more asymmetric in polluted than in clean waters.

In the early 1990s, Vladimir Zakharov and his colleagues at Moscow’s Koltsov Institute extended the approach pioneered by Valentine et al. (1972) to include a variety of related techniques based on the concept of homeostasis.  Zakharov called this approach Biotest (Zakharov and Clarke 1993).  Fluctuating asymmetry is central to the Biotest approach.  Since 1991, several biotest projects have been conducted in Ukraine, Russia, the United States, and Australia.

Fucus from Polluted Site, Puget Sound
The Biotest approach nicely complements the more widely used Index of Biotic Integrity (IBI), which excels at detecting changes in community structure.  But IBI does not discriminate well between the effects of physical habitat disruption and pollution (Karr et al. 1986).  The aspect of IBI intended to measure the effects of pollution on individual organisms is the frequency of gross abnormalities and disease.  These are very insensitive indicators of pollution.  Fluctuating asymmetry, on the other hand, is relatively insensitive to habitat disruption, but it is very sensitive to even mild pollution.  Increased asymmetry will manifest itself long before the appearance of gross abnormalities and disease.

My students and I found little evidence of  gross deformities and disease in fishes of lower Silver Creek, an urban stream in Rome, Georgia.  The fish from Silver Creek appeared to be healthy.  Thus, it was not clear whether habitat disruption or pollutants were responsible for the poor IBI scores.  The stream was channelized, choked with sediment, and a sewer line ran down the stream bed for some distance.  Storm drains, which may contribute pollutants, ran into the stream as well.  Was pollution contributing to the low IBI scores in Silver Creek?  We therefore examined fluctuating asymmetry of two fishes (central stoneroller and Alabama hogsucker) and three aquatic invertebrates (Leptonema, Stenonema, and Isonychia) from Silver Creek and West Armuchee Creek, a nearby unpolluted stream in the Chattahoochee National Forest.  Central stonerollers and the caddisflies (Leptonema) from Silver Creek were more asymmetric than those from West Armuchee Creek.  Alabama hogsuckers from Silver Creek also had reversed polarity of scales in 10 percent of the fish examined (Graham 1996).  Thus, the Biotest approach indicated that pollution stress was also likely, in addition to the more obvious physical disturbance. 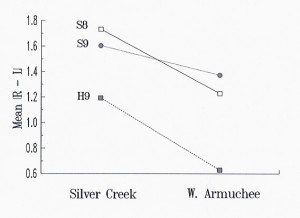 Asymmetry in the caddisfly Leptonema

In addition to the Biotest project on Silver Creek, my students and I have examined the effects of lead and benzene on fluctuating asymmetry of sternopleural bristles in the fruitfly Drosophila melanogaster (Graham et al. 1993c).  Fruitflies exposed to high concentrations of both lead and benzene show significantly greater bristle asymmetry.  Moreover, flies exposed to 10,000 mg/kg benzene show a transition from fluctuating asymmetry to directional asymmetry; they become more right-handed for sternopleural bristles.

Thus, developmental stability is a valuable indicator of ecosystem health that complements  other ecotoxicological approaches.