Here are some data similar to those collected by Aronson et al.:

Enter these data into Stats Homework’s  data manager as four separate variables, and rename the variables. It’s important that you name your variables carefully — each  variable name indicates the level of perceived ability (‘Avg’ and ‘High,’  and the level of accident (‘Yes’ or ‘No’). Your screen should  look like this: 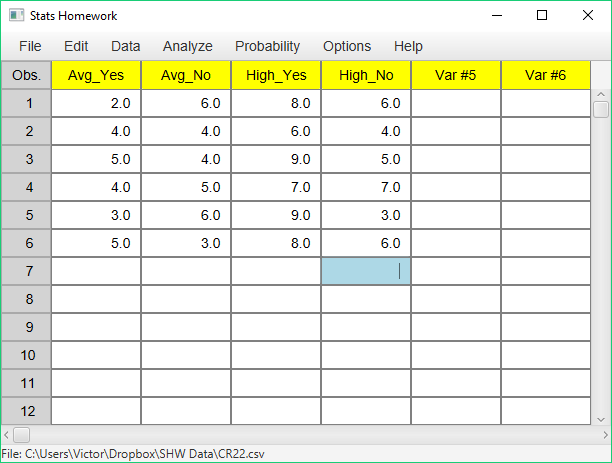 To conduct your analysis,  pull down the Analyze menu, choose Analysis of Variance,  and then choose Two-Factor ANOVA for Completely-Randomized Design. You  will be presented with a dialog that asks you to specify the data-management approach that you are using: 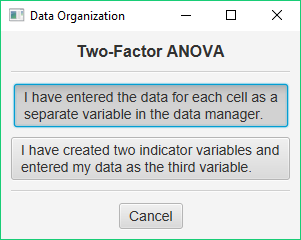 In this case, you should click the first button — you have entered your data as four separate variables.  This will take you to the next dialog: 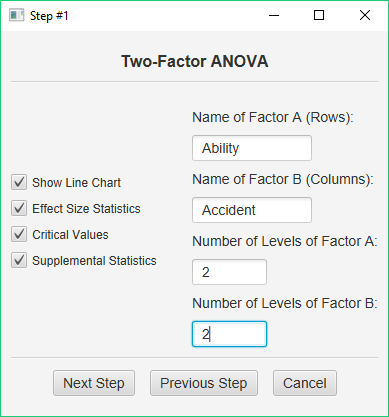 You should enter the names of your two factors — ‘Ability’ and ‘Accident.’  Then, enter the number of levels of each factor — 2 and 2.  Finally, check all the output options and click Next Step.  This brings up the next dialog: 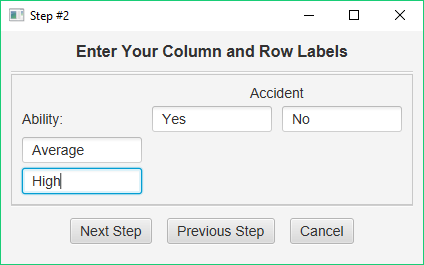 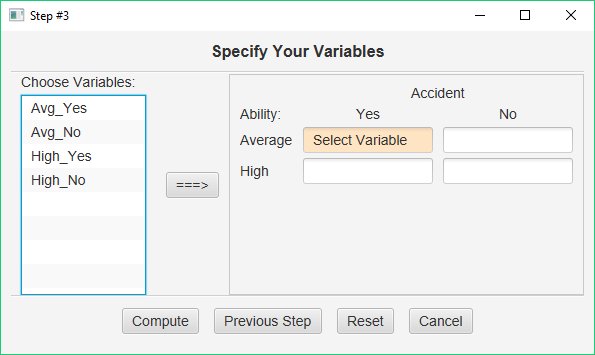 Here, you will specify how the variables that you entered into the data manager will be associated with the cells of your experimental design.  You will click on a variable on the left, and then use the ‘===>’ button to move this variable to your design.  So, you need to start with the variable that contains the data for the Ability = Average + Accident = Yes cell.  When you are finished, this dialog should look like this: 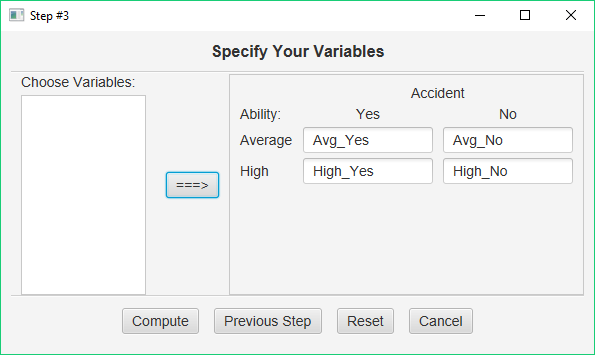 Now you can see why we entered our data into four variables in exactly this order — this makes it quite easy to specify our design for our analysis. In addition, you can now see why it is so important to name your variables in such a way that you indicate the levels of each of your independent variables. Pause here and study this design dialog to make sure that you have set up your analysis correctly.

You will enter three variables — two indicator (independent) variables, and one dependent variable.  You can use numeric or non-numeric indicator variables.  Your data manager will look something like this: 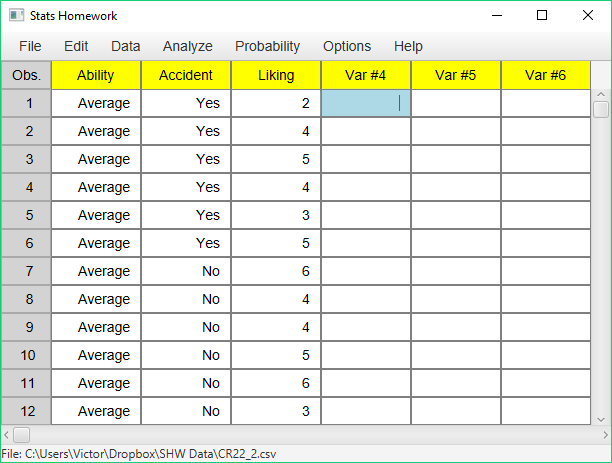 Note that I prefer to use non-numeric indicator variables.  This makes it clear which cell is which.  You will see this clarity when you see the results for this analysis.  When you call on the two-factor ANOVA procedure, you will start with this dialog: 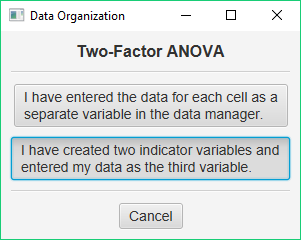 Choose the second option — you have entered two indicator variables and one data variable.  Now you will specify the design: 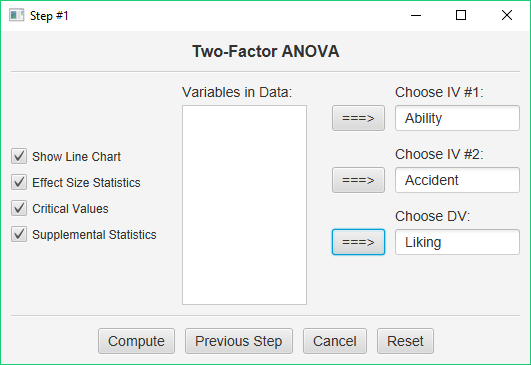 Move the indicator variable for Ability to the first blank, the indicator variable for Accident to the second blank, and the data variable to the third blank.  Check all the options and click Compute.  Did you notice that setting up the analysis this way was much easier?  That’s because you did a lot of the work when you created your data — i.e., you specified the names of your factors and the labels for the factor levels.  The program will figure out that you have a 2 X 2 Design by itself. 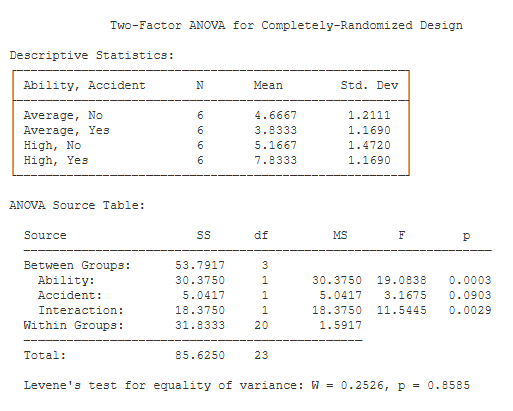 Descriptive Statistics. This table includes descriptive statistics for each treatment group / cell in your design.

ANOVA Source Table. This table details the result of the two-factor analysis of variance (ANOVA). This analysis partitions your variance into four sources: 1) the main effect for the first factor, 2) the main effect for the second factor, 3) the interaction between the factors, and 4) error (i.e., within-groups). Each variance component is associated with its own sum of squares (SS), degrees of freedom (df), and mean square (MS).

Levene’s Test. One of the assumptions of your F test is that the treatment groups have equal variance. Levene’s W provides a formal test of this assumption. If the p value of W is less than .05, you would be concerned that your groups have unequal variance.

Critical Values. These are the values from a statistical table of critical values for the F test.

Supplemental Statistics.  These are the preliminary statistics that you need to conduct this analysis by hand. 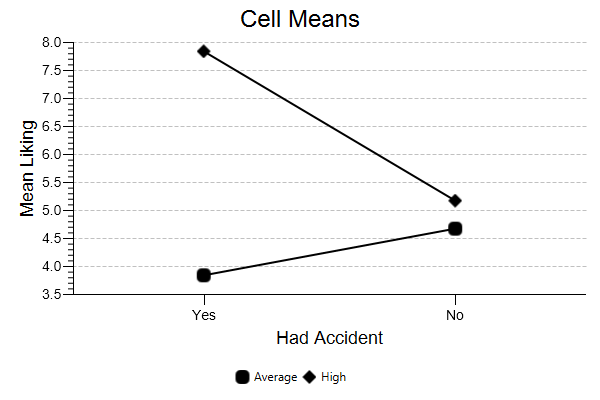 You can modify this chart in several ways — you can reverse the factors, resize the chart, and rescale the Y axis.  Then, you can save the chart to disk or copy it to your clipboard.