Here are some data similar to those collected by Aronson et al.:

Compute the test statistic. The Source Table for this design will look like this:

Also, you should compute the sum of scores (T) for each treatment condition (cell) in this design:

Now, we are ready to begin the Analysis of Variance. The Sum of Squares Total is equal to:

where T is equal to the sum of scores in a particular treatment group.

We can easily find the SS Within Groups by subtraction:

We will begin by computing the SS for perceived ability level. Here, we focus on the row totals, and we ignore the column totals:

where T is equal to the row total. Next, we compute the SS for the spilling-coffee manipulation. Here, we focus on the column totals, and we ignore the row totals:

where T is equal to the column total. We find the SS for the interaction by subtraction:

Here is your completed Source Table:

Conduct hypothesis test. In our study, each of the the F statistics will have 1 and 20 df, and alpha = .05. If you look up the critical value of F in your table of critical values, you will see that if any of your obtained Fs is greater than 4.35, you would conclude that this effect was significant. You will see that this study resulted in a significant main effect for ability level, and a significant interaction between ability level and whether or not the contestant had an accident.

To find out, we need to explore the means of our treatment conditions. Divide the cell totals by n to compute the cell means:

Create a line graph of these cell means by hand, or you can use a program like Microsoft Excel® to create this graph: 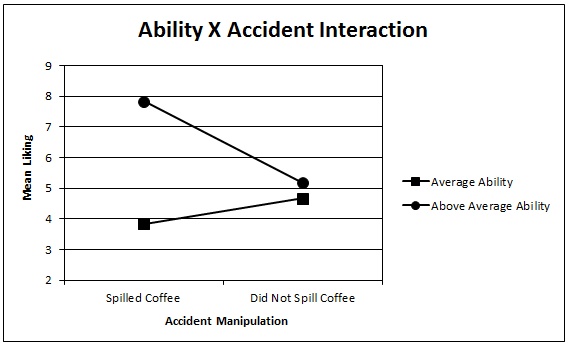 Eta Squared is an estimate of the proportion of variance in your dependent variable that can be accounted for by the main effect of perceived ability level. However, the problem with
Eta Squared is that it will systematically over-estimate the variance accounted for in your experiment; the smaller the sample size in your study, the more biased Eta Squared will be. So, we typically prefer to compute an unbiased estimate of the variance accounted for. Here is how you compute Overall Omega Squared for the main effect of perceived ability level:

where a is the number of levels of ability (i.e., Factor A). So, we could conclude that our manipulation of of perceived ability level accounted for about 33% of the overall variance in the dependent variable (i.e., liking ratings). However, computing effect size for a factorial design is more complicated than it is for a one-factor design.

Some statisticians would argue that in this design, the variance due to the other main effect and that due to the interaction effect are not related to this main effect. They would suggest that we should partial out the variance from these two sources, and consider only the variance attributed to perceived ability level and within-group (i.e., error) variance when computing effect size.

If we follow this approach, we would compute Partial Eta Squared:

where (a – 1) is equal to the df for the ability factor. To help you check your computations, the table below displays all of the effect size statistics for this design: